To regulate the greenery of different areas and improve the level of comfort of these areas our “PAWLIN Technologies” company proposes solutions based on automatic processing of remote earth sounding data using drones and satellites. 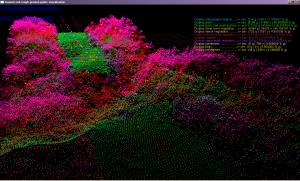 Сlassification of greenery, objects and wires in 3D-cloud of points.

Nevertheless, technologies that are used in our company have their both pros and cons. Thus, lidar scanners help to create 3D relief and terrain models excluding greenery and also to estimate the height and density of greenery and even the geometry of wires (connected in networks). But lidar scanners are highly expensive. Satellite imagery doesn’t need any certain planning but it is usually made in low resolution and also have 1-2 weeks delay. Nowadays new satellite imagery services are being developed. High resolution images can also be enough expensive. It’s worth considering that drones sonars are rather cheaper than lidar scanners but they provide less efficiency and accuracy. Sonars and radars don’t work through dense greenery. Processing and analysis of the data is made by operator using automatic systems. The level of automation is determined by the amounts of data (when there’s less data it’s easier to analyse something manually). Using hyperspectral cameras is a very perspective method of remote sounding data gathering, they let classificate the greenery and its condition with high precision and also determine the problems that are not visible to the human eye.

To solve the problems with greenery regulation on different areas and to increase the level of comfort of these areas we can use our already developed automatic processing of remote sounding data.

To solve non-trivial tasks, applying the latest world achievements in science and technology